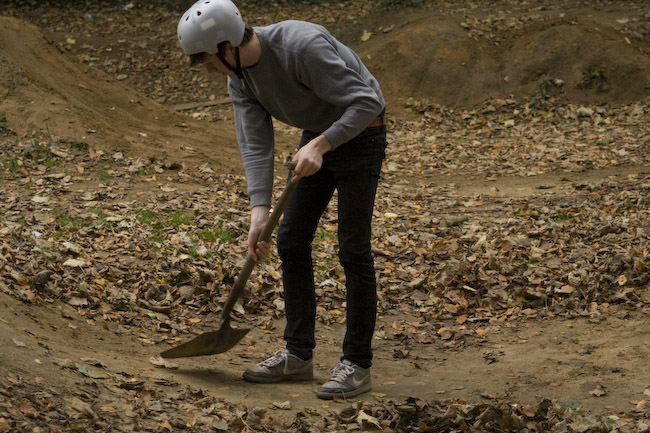 Went to yeovil last saturday again. On the way some nutcase overtook Will on the otherside of the road on a blind corner going clearly too fast and binned it into the hedge at a junction. When I drove back to find out where they were I saw him. He was talking fine and seemed ok, but his leg was twisted round strangely. Spiral fracture probably – horrible. 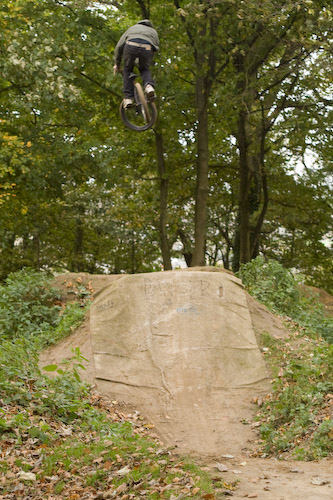 Yeovil was a good time again. Winmill came too; some fun trains were had. 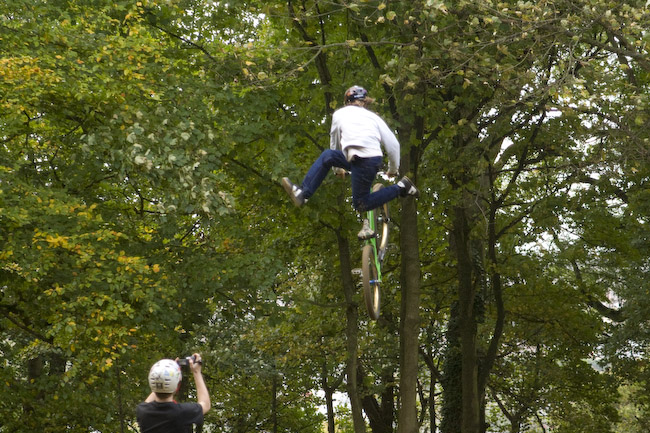 There was a crazy dirt biker there doing leg maneuvers. 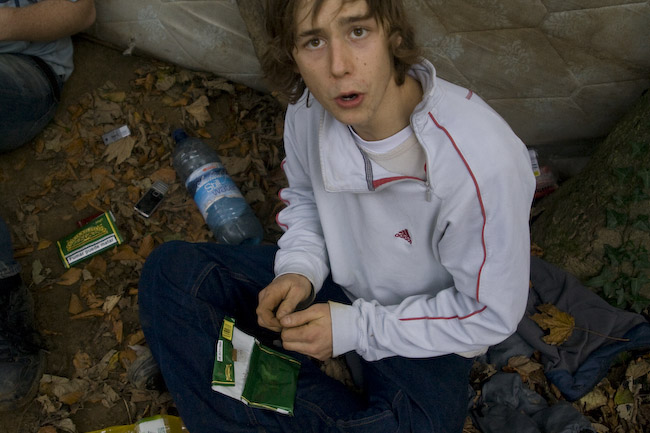 All mountain bikers look something like this. He knew Winmill as well, from back in the day when Winmill was the king of the woods. He also dug up the big line last jump, changed it, found out it didn’t really work, and as we left set into putting it back like it was. 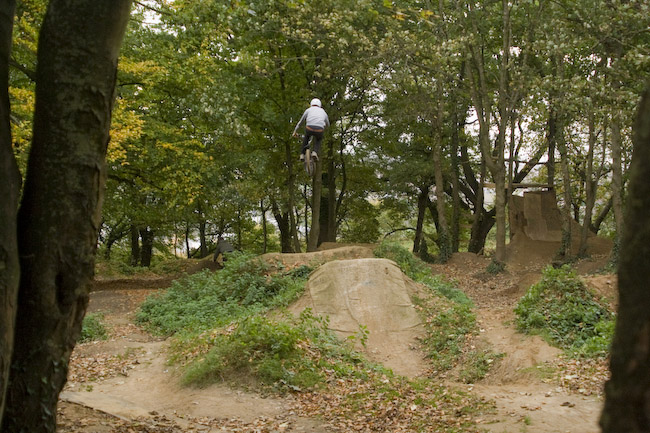 Will took a photo of me riding! On a jump that is actually really fun. Good and kicky – gives time to move the bike about a bit. Good. 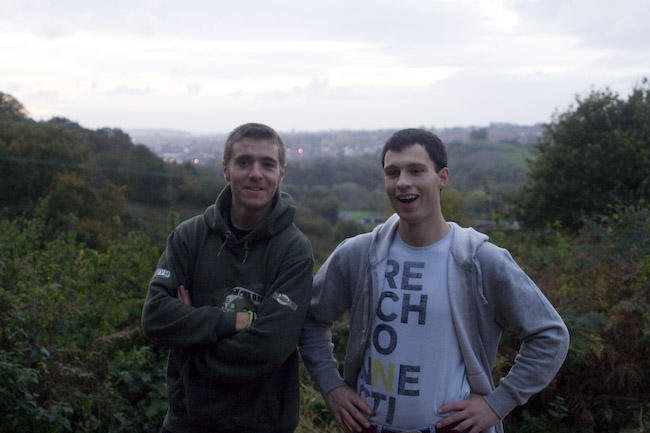 We took some family album photos… 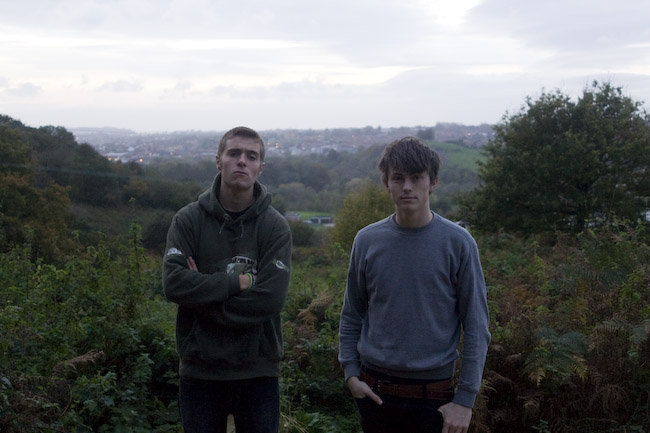 and went home. I had a cream tea: good day.

1: http://vimeo.com/1967938 I put up a short video from a short visit to Winch on the last leg of our lovely summer trails weekend. It has very nice lighting, and also a really good shot of the skatepark line with my steadycam final version.

2: You may or may not know [I don’t check the comeup or rideuk websites either…] that I got some t-shirts made, organic cotton of course. You can click on the thing top right, or the store link in the menu and find those to purchase if you feel like it. I’ve sold a few and when I’ve sold the rest I’ll probably do some more. 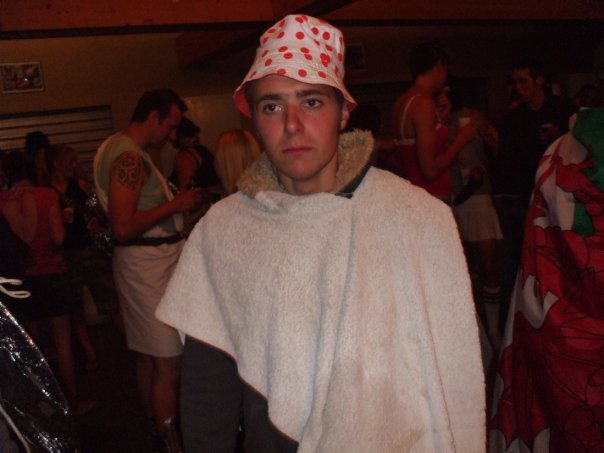 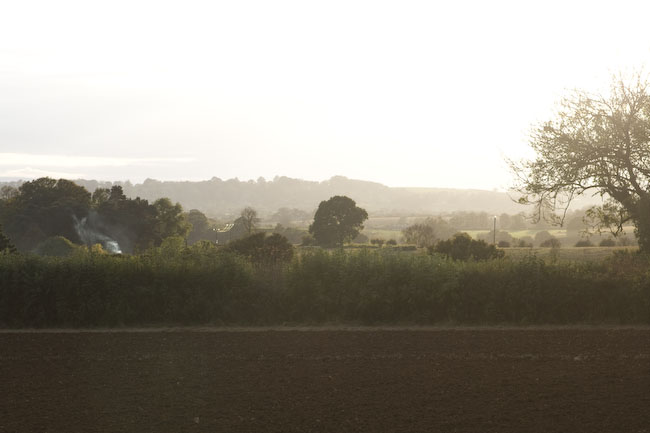 I might live in London, but there is an awesome train service and the countryside is better. So I’ve been home quite a bit. We’ve also been polishing off the trail season at home, had some really good final sessions. No pictures really [except a crap one by bryn] because as autumn dies and there are few sacred minutes of flow left you need to get your priorities right. 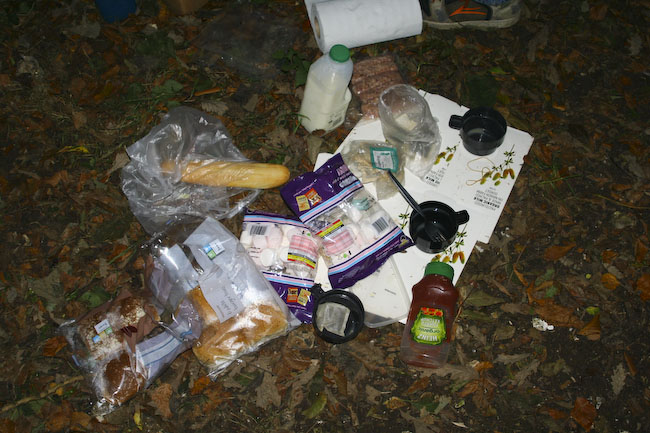 Weirdly home trails have actually be running best all year last weekend. So that’s pretty nuts. Also tarps mean the big line is going to run well into the winter I think. Been having plenty BBQs to counteract ones missed over the rubbishy summer. 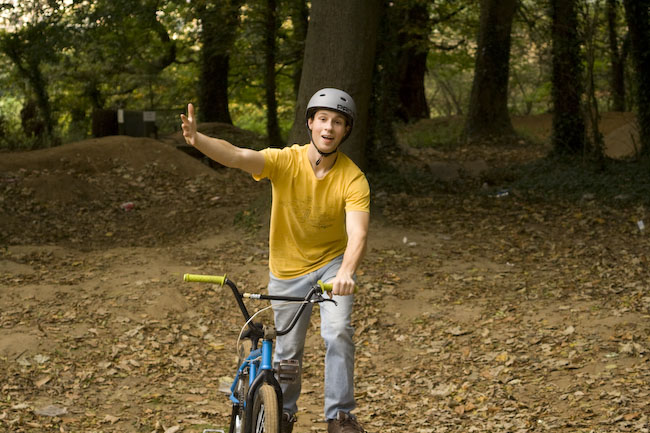 Also went to Yeovil trails the other day, meet Will and Woody up there as they’ve been riding there quite a bit I think. You will know Yeovil trails from classic videos such as No Front Teeth – Luke Marchant section I think, and others that I can’t really remember exactly. Somewhere in Sprung, basically in old Alex Rankin films. 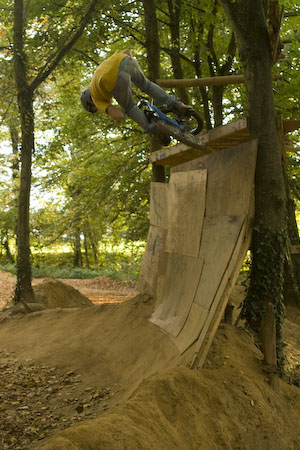 They used to be totally rad [2005ish?] but they have always been totally raped for some reason. After a while the locals up there just gave up digging so they are kind of random lumps. The soil is like Cothill and pretty good to put stuff up with, but dies pretty easy. Especially when ridden by trials motobikes!, quads!! pitbikes and big mountain bikes with downhill tyres. However some stuff gets built, like this mad contraption that somehow Will can air! That is such a shady transition and maybe 8/ 9 foot high. 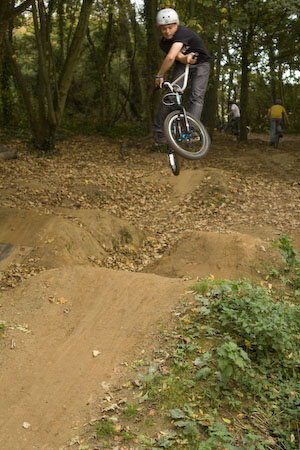 This is Woody, who is another addition to the expanding obmx trails crew. Which is all good news and more people equals more digging, equals better ridden in jumps, equals more fun. Kids pretty good at X-ups too; doesn’t take too well to trails bullying at Yeovil; but performs well under nonchalant encouragement at the home trails. He will also do what is know in the industry as a ‘special’ radiator installation, on a sunday even, for only 80 quid an hour. 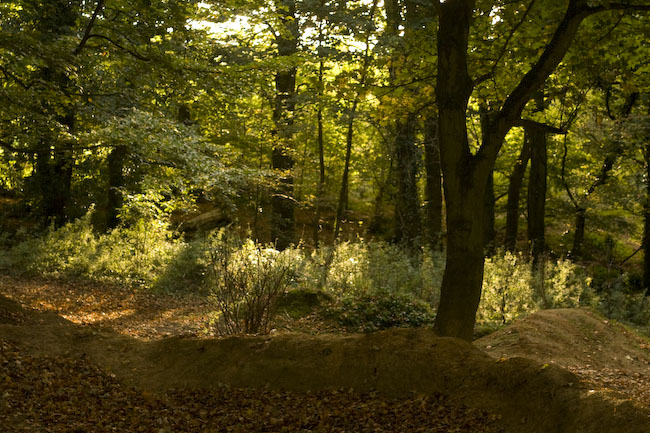 When I went up Yeovil I forgot to take the brush I was going to take with me, so ended up borrowing one off some kind mountainbiker guy to tidy up, and also wanted to smooth up some stuff and fill in some crappy wholes. I asked the other mountainbikers if they had any tools, or maybe they offered, but turned out they had one hand trowel and one saucepan as all the equipment to maintain the jumps. I might go up with a spade or two and I think it would only take about an hour to make those jumps look and ride really nice. 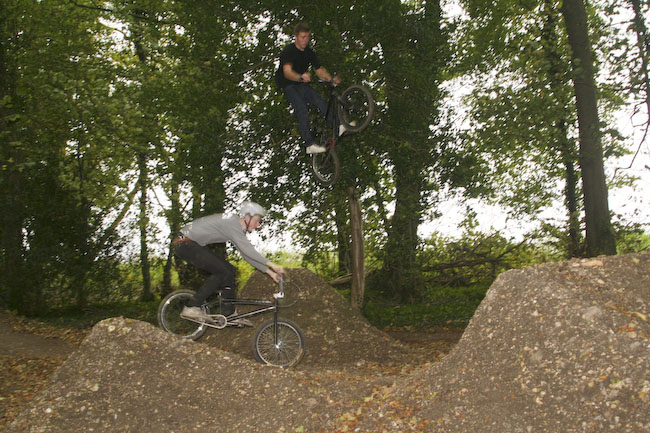 Home trails session was good times. Riding sweet and all in all a good time. Trains and such were going on, so we thought we’d crack out the over under. Pretty crazy really that is takes almost exactly the same time from the start to take two very different routes to the same spot. Next summer is the 4 up over under with one round the berm of the little one and one above, and one over the big one and one riding under them on that. Cool picture one day. 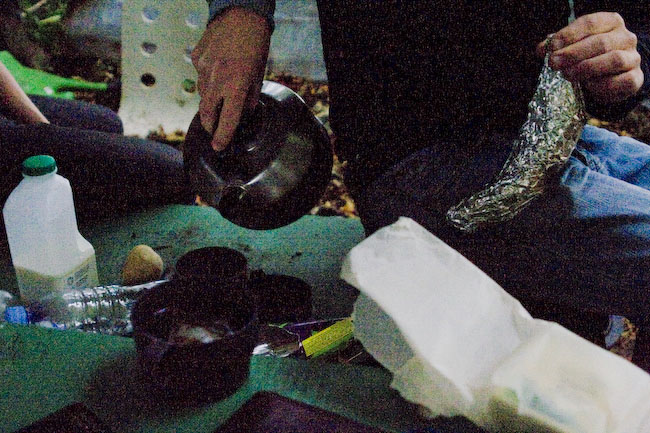 It gets dark quick these days, so it was time for bbq banana splits. Dialled: I love trails and I love the woods. Dig time soon.

luckily that isnt 30 seconds ride away from my halls…. 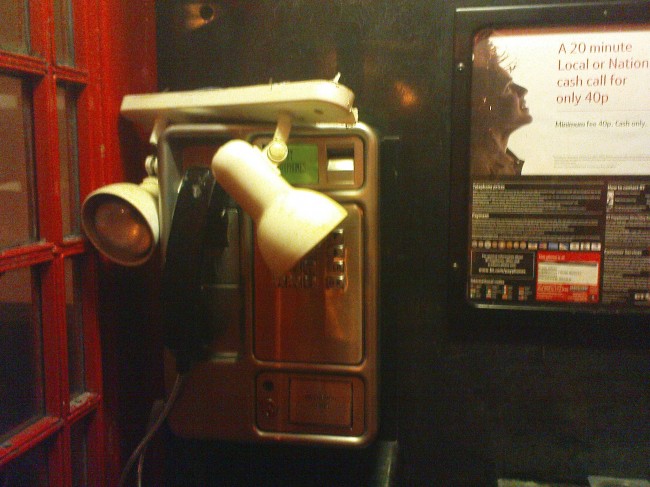 yesterday had a fun session at the trails, amazed it was dry!

paddy’s at uni now, so is graeme, so technically the trails are now mine, winmill’s and mark’s when he is allowed out. root sections and rock gardens here we come.

couple weekends ago we went up to stay with aidan and chaz in oxford which was super fun. we went to cothill which then saw their unofficial jam which was pretty cool and then got a little loose at the carling academy which was also super fun. sunday saw churtsey which is amazing. crazy place. even more maaazing was aidan’s 3 over ultimate warrior….which is mahooosive….good name too.

since i didnt take my camera to trails yesterday, this will have to do for now-